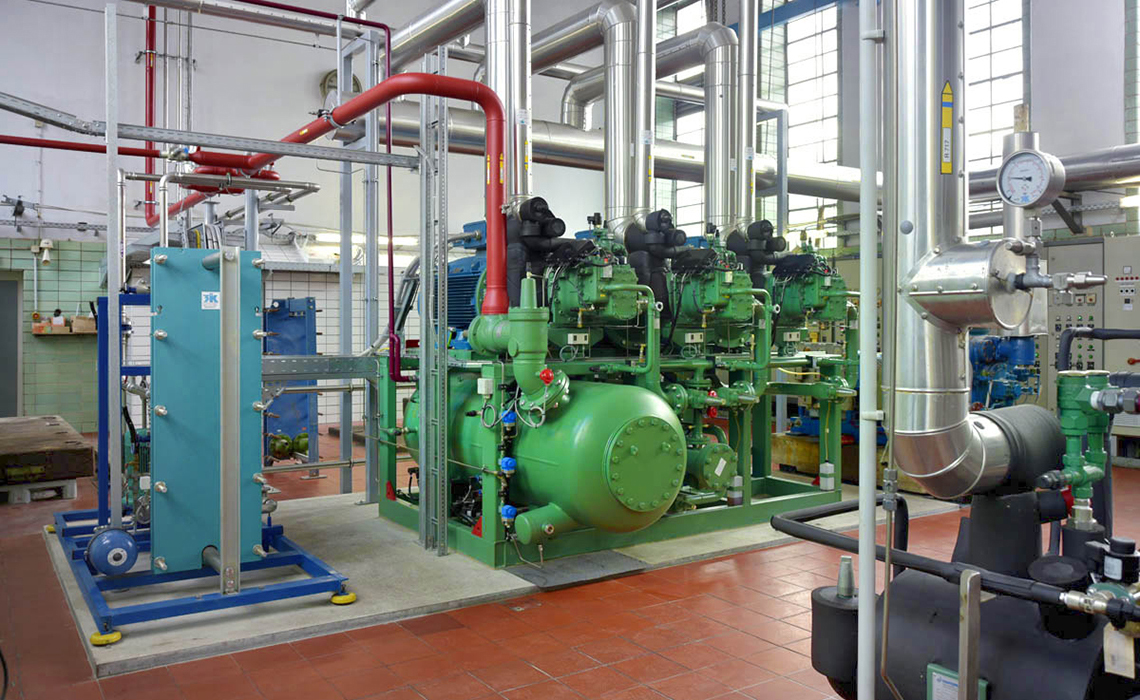 For more than 40 years, the refrigeration and air conditioning specialist has been offering solutions for ammonia applications. With its ammonia compressor packs (ACPs), BITZER has launched a highly efficient and reliable compact screw compressor unit for industrial refrigeration. The ACPs equally convince users and experts worldwide: In March 2019, ACR News, one of the UK’s leading refrigeration and air-conditioning magazines, has named BITZER Ammonia Compressor Packs as Refrigeration Product of the Year.

Since the inception of the Ecodesign Directive and the F-gas Regulation at the very latest, refrigerants with a low global warming potential (GWP) have been one of the most important topics in the refrigeration and air conditioning industry. BITZER is well prepared for these developments, having promoted natural solutions such as CO2, propane and ammonia for many years.

‘Due to its high energy efficiency and outstanding thermodynamic characteristics, ammonia is particularly ideal for larger systems in the food industry and warehouses, as well as for ice rinks and many other applications,’ explains Andreas Schulaks, Head of Industrial Refrigeration at BITZER. ‘In addition, it doesn’t have any global warming or ozone depletion potential (GWP and ODP 0). If an ammonia refrigeration system is placed outdoors, for instance as a container solution, it’s a safe alternative to synthetic refrigerants, for example in the form of a liquid chiller. For example, Terminal 5 at Heathrow Airport, the largest in Europe, is cooled with ammonia.’ Thanks to their exceptional thermodynamic characteristics, R717 water coolers like this achieve much higher cooling capacities than HFC systems of a similar construction size.

BITZER ammonia compressor packs achieve a cooling capacity of up to 3 MW (–10/35°C) and consist of compressors, motors, oil separators, an optional oil circuit, control units and frequency inverters. Thanks to the parallel connection of several compressors and their intelligent capacity control, the ACPs are extremely efficient in part load and guarantee reliable operation. The carefully developed mechanical design also makes the compact screw compressor unit exceptionally service-friendly, as the components are easy to reach. These many practical benefits are popular with users around the globe.

Reliable refrigeration for slaughterhouse in Bochum

Food production and storage are subject to especially high standards. A key aspect is reliable cooling capacity, which until just about two years ago was provided by an outdated refrigeration system at the EG-Schlachthof Bochum, Germany. Since autumn 2017, a modern BITZER ammonia compressor pack with three OSKA 85 screw compressors has been maintaining the right temperature inside the slaughterhouse’s cold stores.

Short downtime thanks to fast conversion

The planning and implementation went off without a hitch thanks to the project team comprising Christoph Beidecker, Technical Director of Bochumer Fleischhandel, Moritz Kruse, Planner and Project Manager at the system designer 3K Kälte- und Klimatechnik Kruse GmbH, and Andreas Schulaks, Head of Industrial Refrigeration at BITZER. BITZER delivered the compact screw compressor unit within just a few months, and the 3K technicians began using the new system around half a year later.

One system, lots of responsibilities

One of the project requirements was the capability to use a brine system to temper production cooling, which at that time was still operated with refrigerant containing CFC. BITZER screw compressors are responsible for cooling the pig and cattle cold stores. ‘In the future, they will also provide tempering in the production facility in a secondary circuit,’ says Andreas Schulaks. The system’s oil cooling also offers heat recovery to preheat the feedwater for the heating system: the water is heated to 56°C, and at full load, 124.6 kW of oil cooler capacity is available. 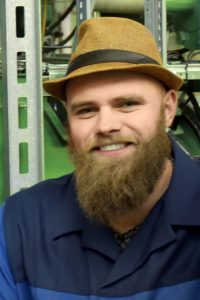 ‘We’ve been working together since 2016. BITZER compressors are durable, ultra-reliable machines that are well established in commercial refrigeration. All that and the simple servicing of the compact screw compressor units and compressors made the decision to go with BITZER an easy one.’

Always on the safe side: BITZER ACP

Even if a fault were to occur, the ACP system would continue to maintain reliable operation. ‘The slaughterhouse requires a cooling capacity of around 1,150 kW,’ says Kruse. ‘The three screw compressors can provide that with ease at just 2,900 rpm, offering a combined 1,200 kW. But more importantly, we can also operate the compressors at up to 4,200 rpm and thus achieve a maximum capacity of 1,548 kW. Even in the case of a machine malfunction, we have sufficient redundancy, without having to deal with a significant loss in capacity and thus production downtime.’ Because the project team also integrated an economiser with sliding suction position into the system, it’s highly efficient in both part load and full load. ‘In April 2018, the total power consumption of the system was 67,988.0 kWh for the three BITZER screw compressors, putting the system’s COP/EER at 4.28 at the machine shaft – a figure that can actually be measured,’ Kruse adds. 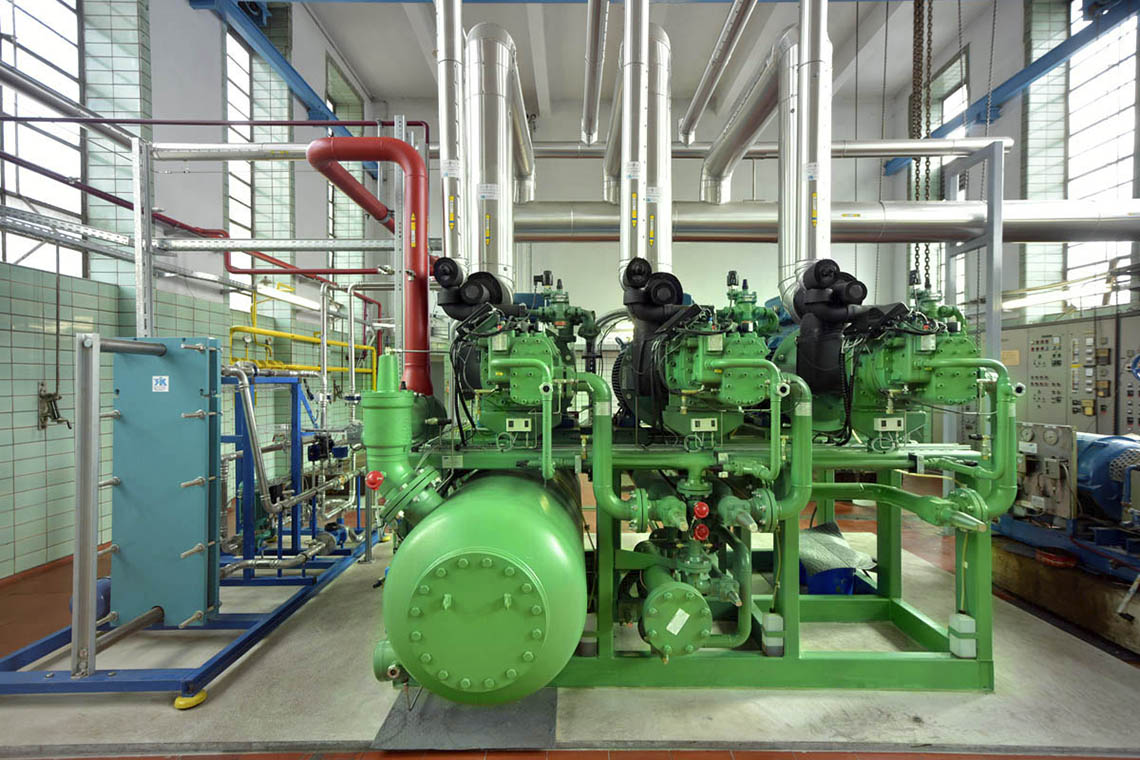 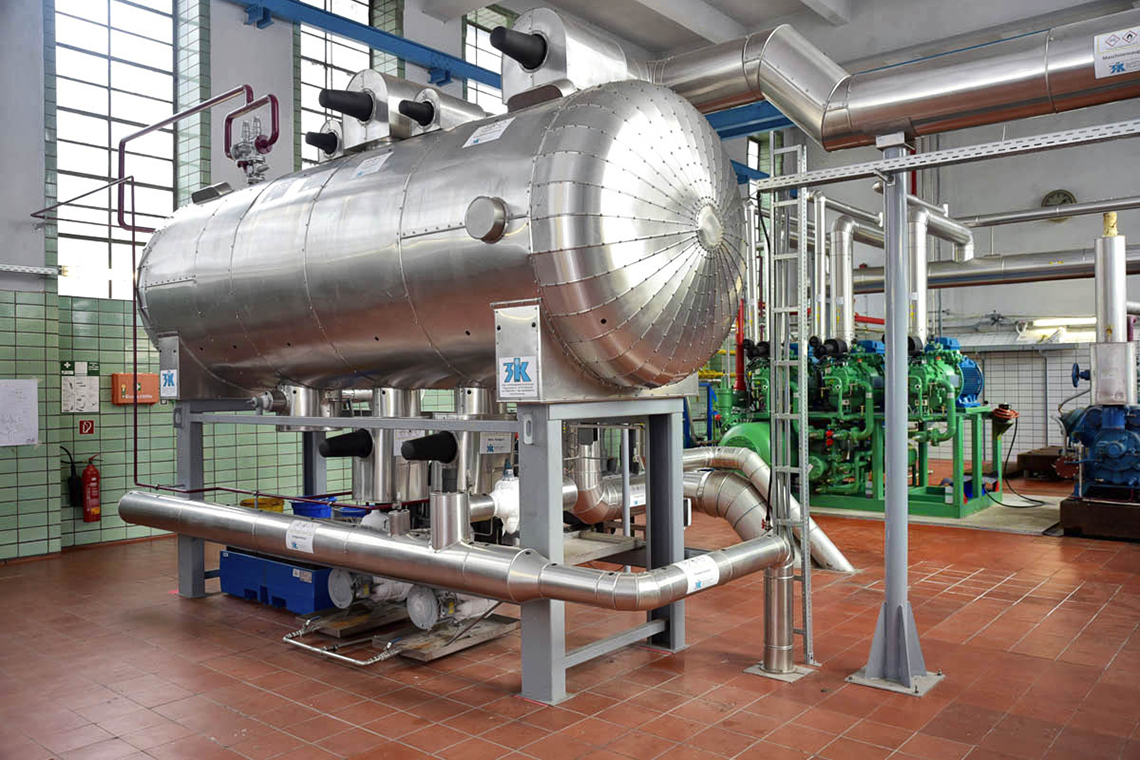 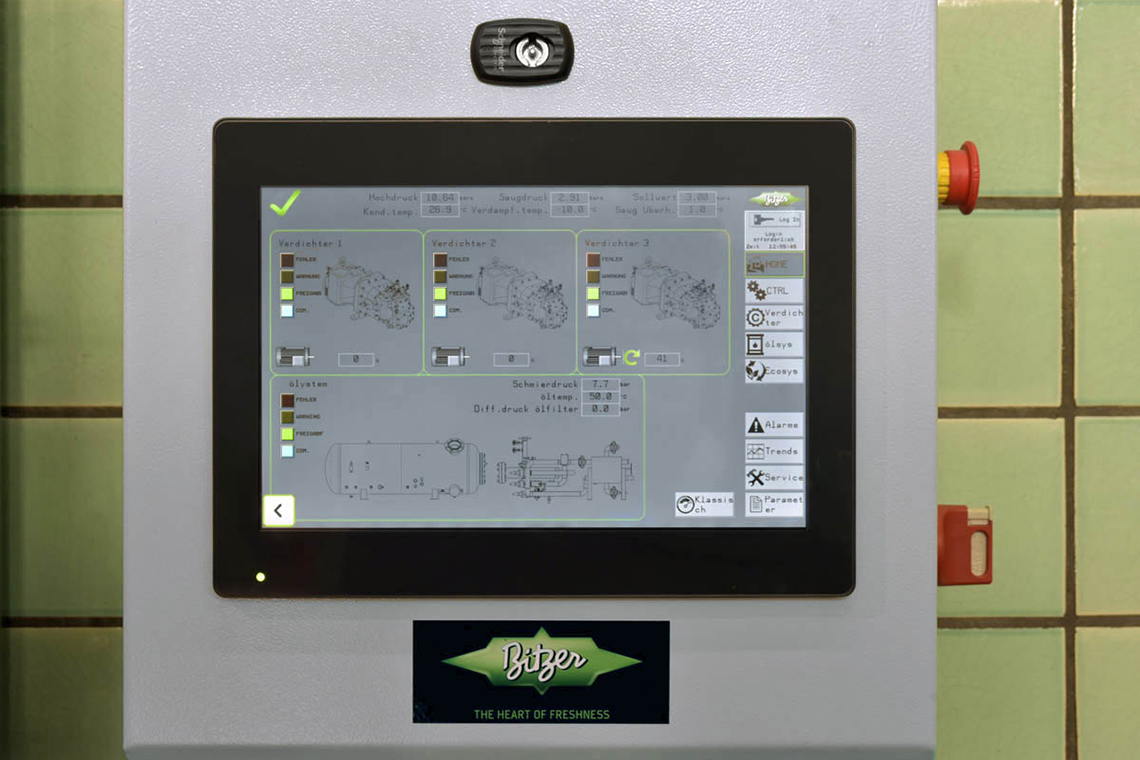 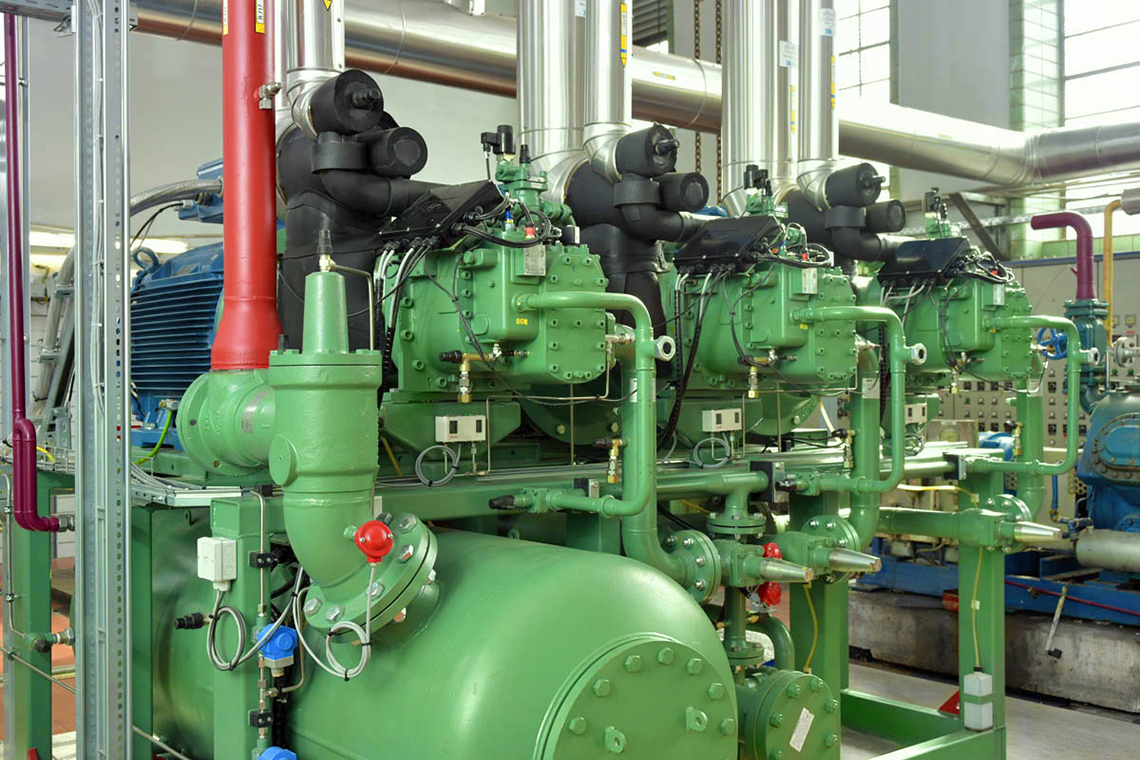 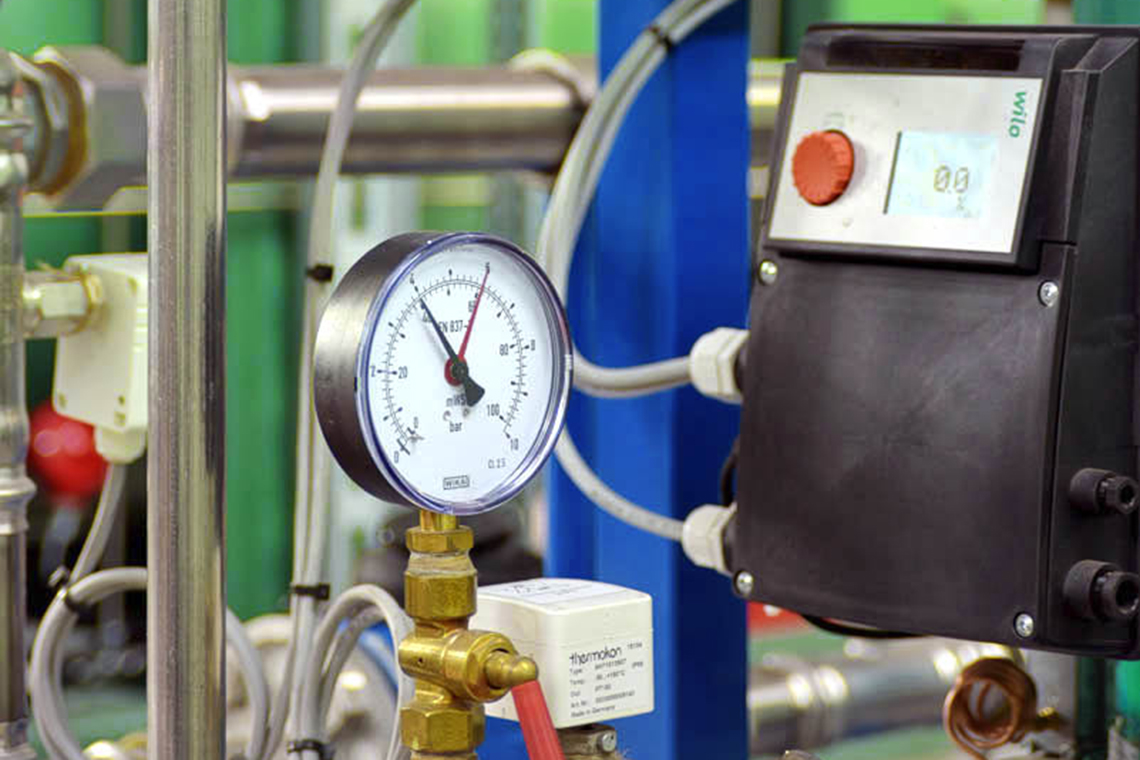 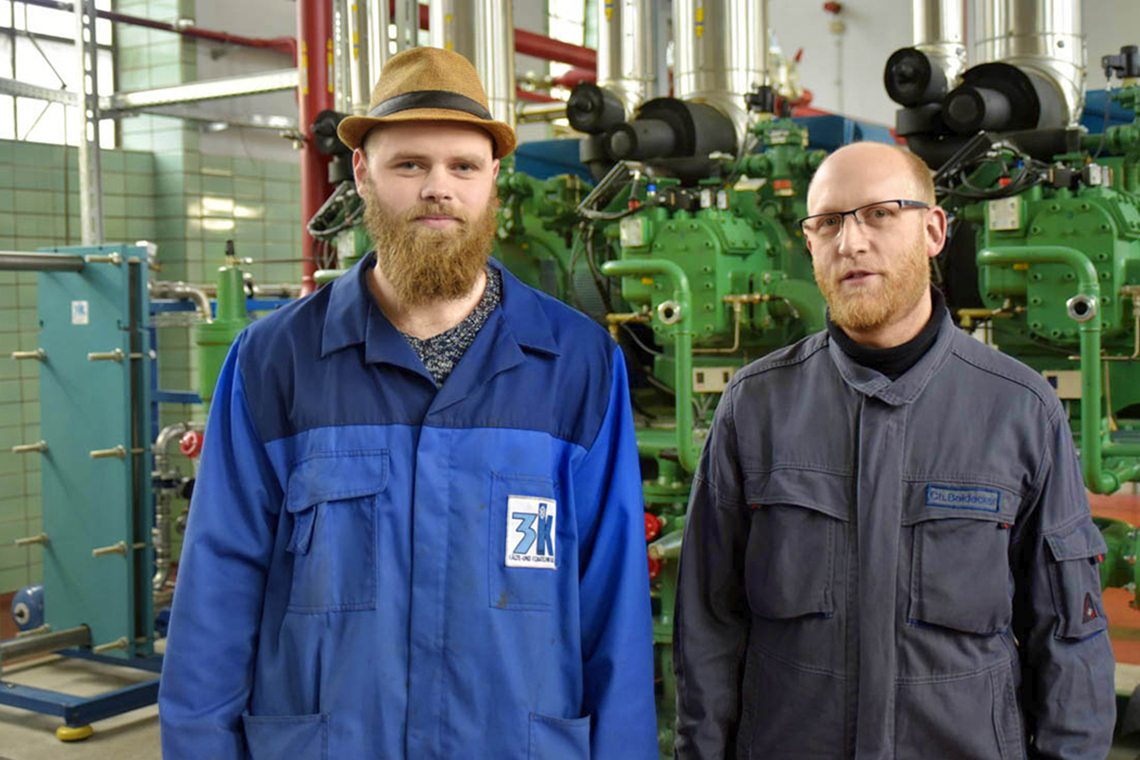 Two ACPs with a combined cooling capacity of 1.4 MW have maintained the right temperature at a pizza factory in northern England since early 2019. The compact screw compressor unit covers the full cooling demand of the food production system, which measures approximately 5,600 square metres. In concrete terms, the ACP systems optimally temper the factory’s 2°C refrigerated storage facility, the –5°C spiral chiller and the –18°C freezer facility at all times.

The operators of the pizza production facility opted for an ammonia solution with several compressors in order to ensure maximum efficiency and, at the same time, keep the project’s payback period as short as possible. Strength was also an important factor: thanks to the three powerful BITZER screw compressors per ACP unit, the system offers maximum operating reliability for the temperature-sensitive goods – around the clock, 365 days a year. The three compressors per ACP unit also offer a benefit when it comes to system maintenance: while one compressor is being serviced, the other two remain ready-to-operate, thus preventing downtime and improving life cycle costs. 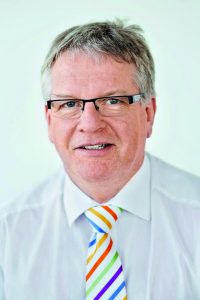 ‘This very successful project is a good example of how to exploit the strengths of modern BITZER ammonia refrigeration systems. Our solution is efficient, safe, robust and affordable.’

The most energy-efficient system of its kind

Commissioned at the beginning of the year, the system is currently the food manufacturer’s most energy-efficient system of its kind, thanks in part to the compact BITZER screw compressors. The capacity of the lead compressor is controlled by an internal variable speed control, which significantly improves part load efficiency and enables a soft start. An optional economiser module can also further increase efficiency. 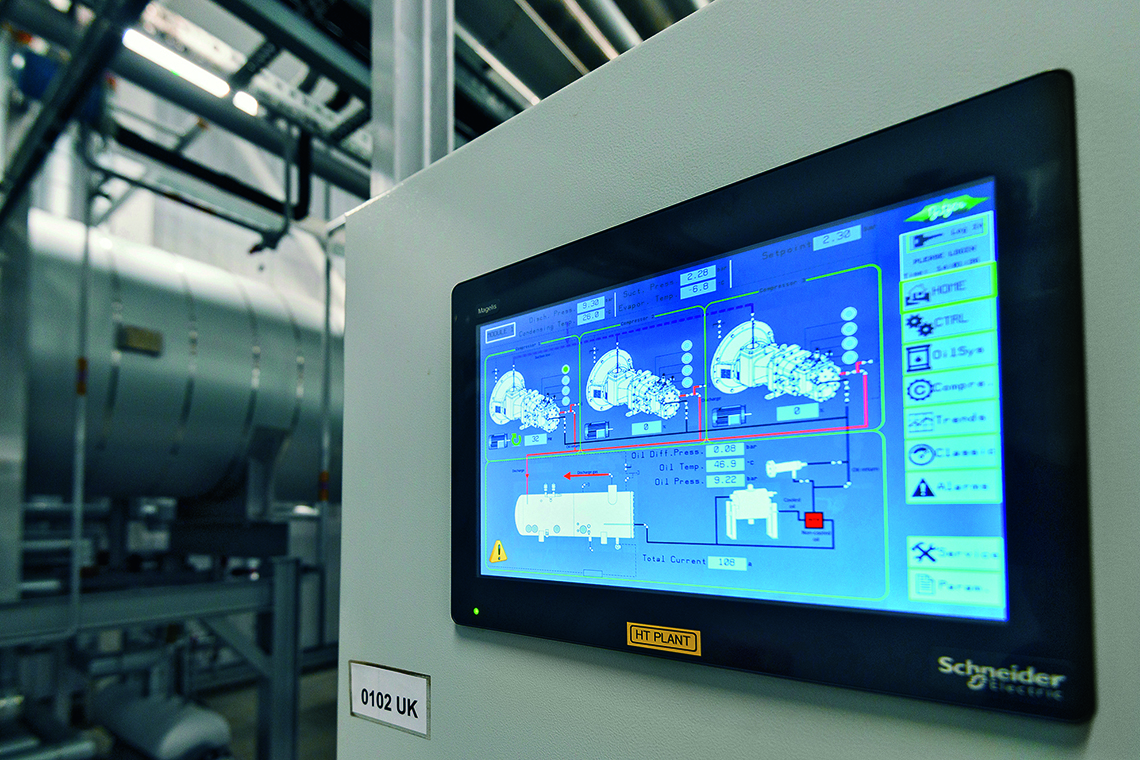 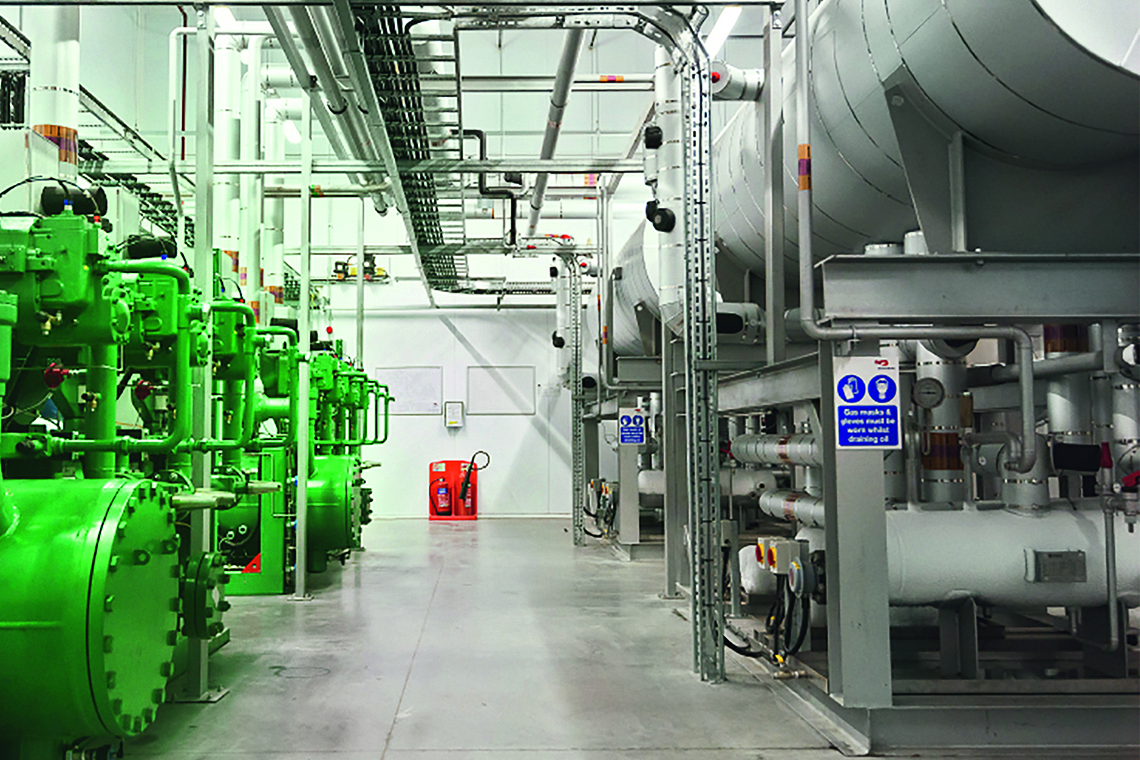 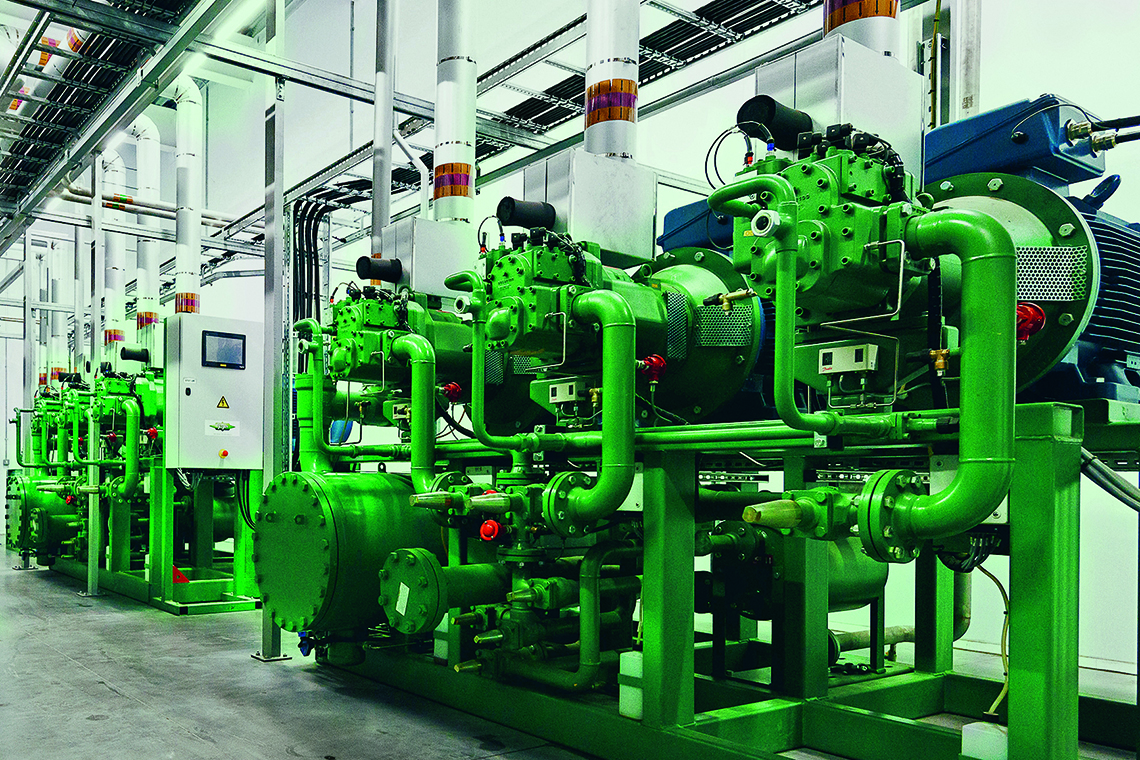 ‘This very successful project is a good example of how to exploit the strengths of modern BITZER ammonia refrigeration systems. Our solution is efficient, safe, robust and affordable,’ says Kevin Glass, Managing Director of BITZER UK. ‘Ammonia systems are traditionally built as one-offs, often in less-than-ideal conditions. But that’s not good enough for BITZER quality standards, which is why we manufacture ACP systems only in perfect conditions at our manufacturing sites and can thus fulfil even the most demanding standards.’ BITZER also simplifies and accelerates installation by supplying a turnkey compact screw compressor unit.

BITZER India has recently commissioned the first ammonia compressor packs in the country: in the subtropical temperatures of Khurja, a city located 80 kilometres south-east of New Delhi in northern India, the food manufacturer Creamy Foods could not exist without absolute reliability, which is why it has opted for two ammonia compressor packs in BITZER quality. The two ACP-8591k-2V models are highly efficient and maintain the optimal temperatures in the cold store, ice formation tank and processing room at all times. In addition to their reliability and energy efficiency, the BITZER cooling units boast exceptionally low life cycle costs. 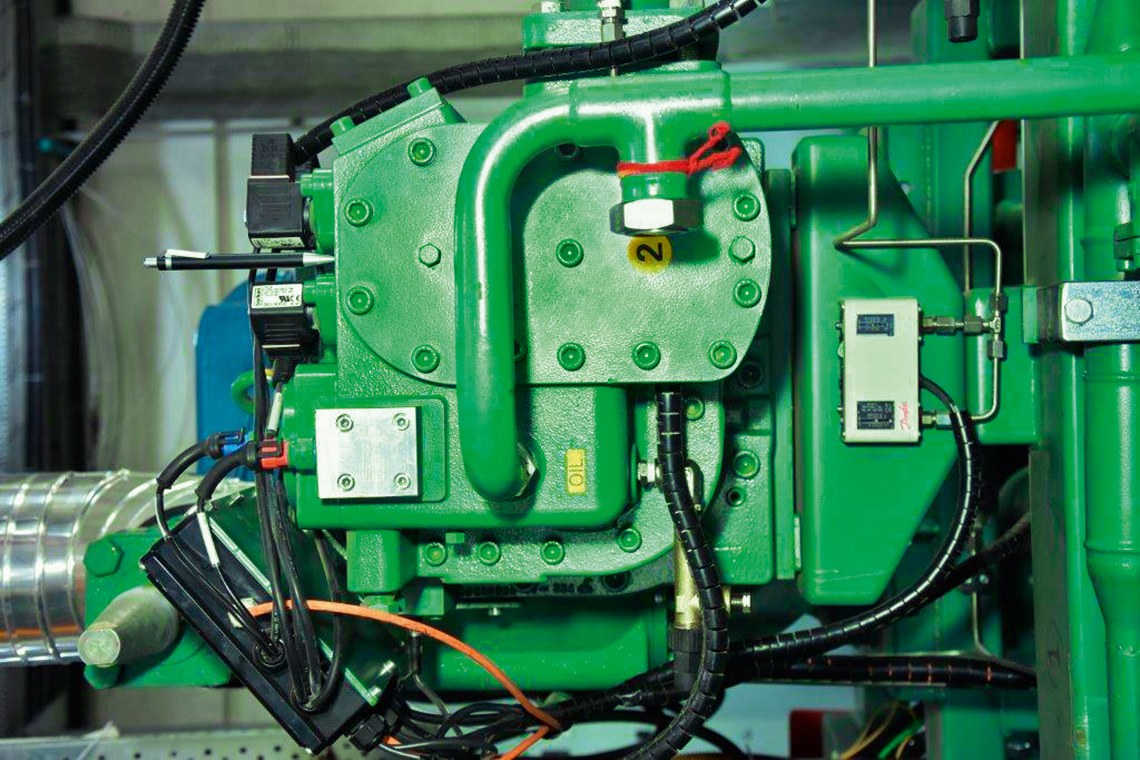 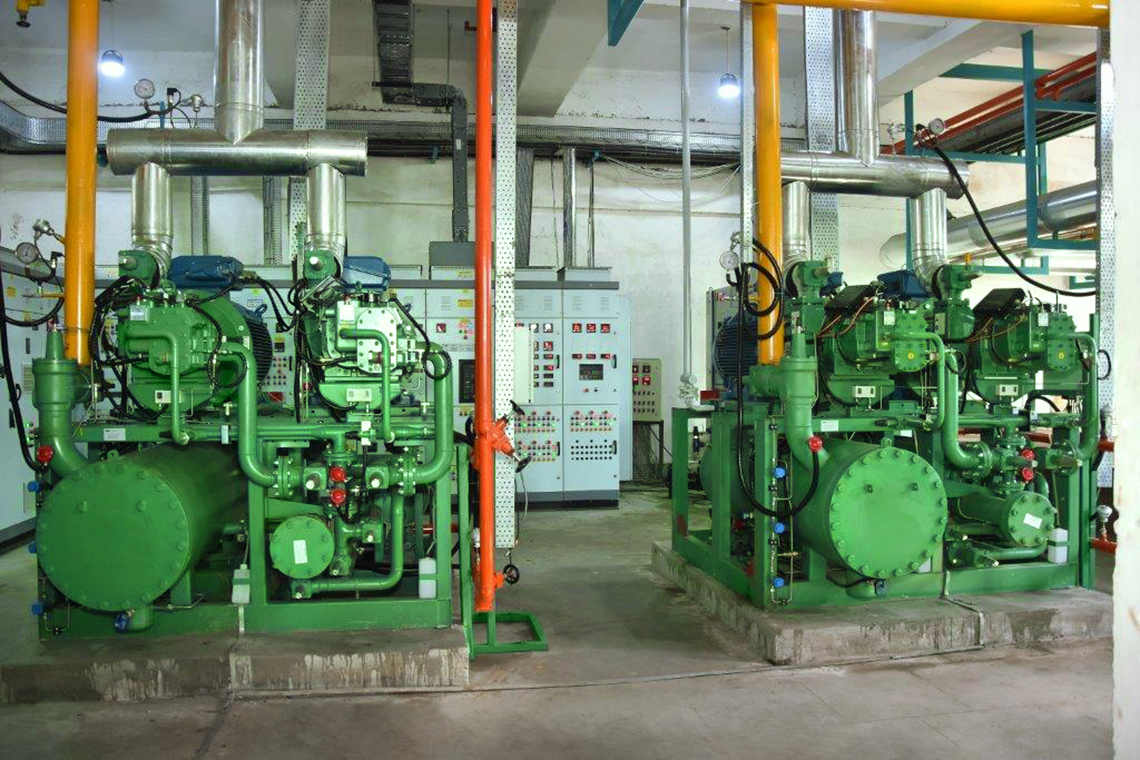 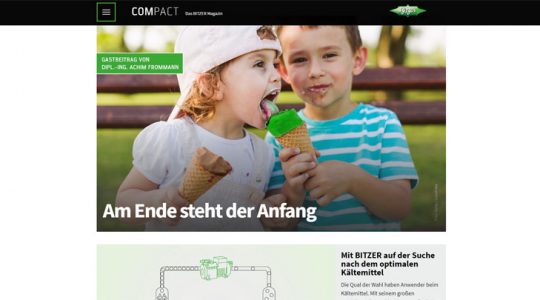 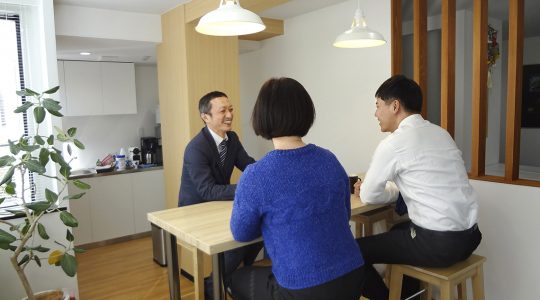 Nearly twice as much space as before: the BITZER Japan team has been working at a new office in the centre of Osaka since December 2018 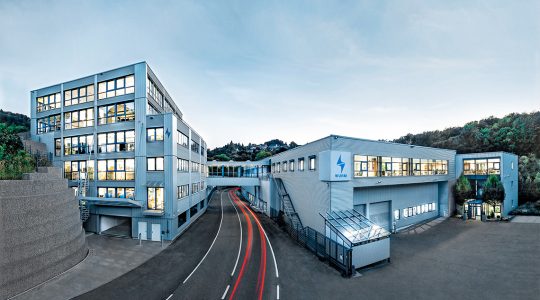 At the beginning of January 2019, BITZER and the automation expert Wurm paved the way for a successful future together