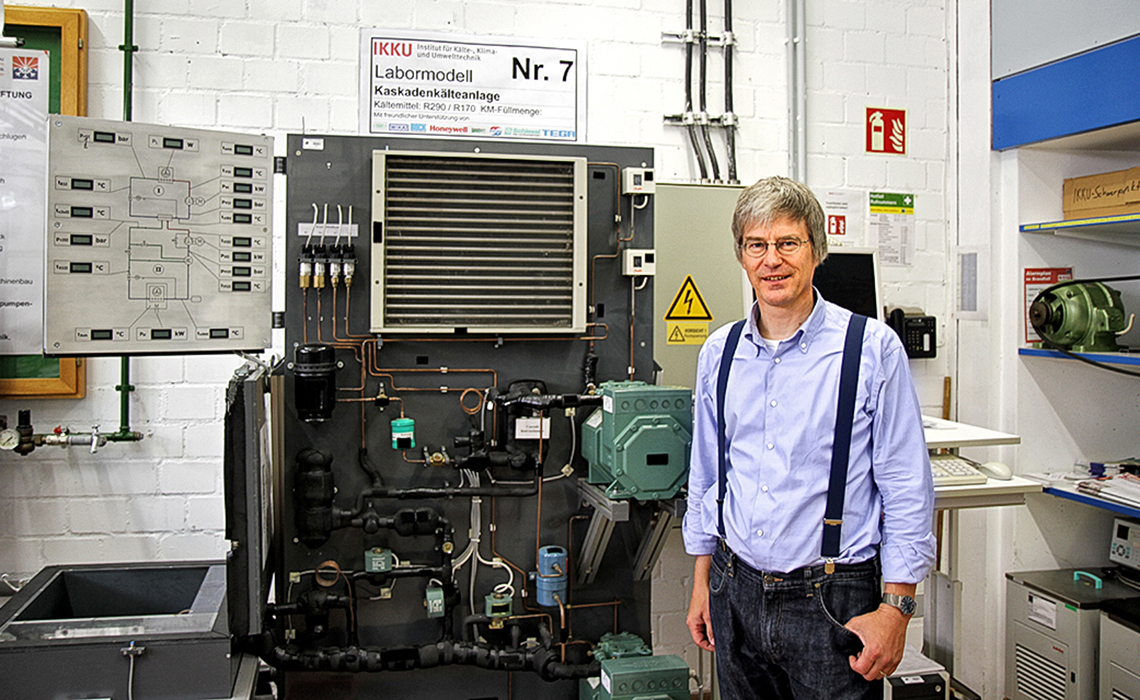 ‘How are people supposed to identify with refrigerators?’

He knows where the industry is headed: in his conversation with COMPACT, Dr Michael Kauffeld, professor at Karlsruhe University of Applied Sciences, provides insight into research and challenges in his area of speciality: refrigeration, air-conditioning and environmental technology

Professor Kauffeld, as Speaker of the Institute of Refrigeration, Air-Conditioning, and Environmental Technology at Karlsruhe University of Applied Sciences, you have the best insight. Where is research headed?

There are many fields, including energy storage and renewable energies. Refrigeration systems require cold at some point or another, which I can produce, for example, with excess energy. I then simply collect energy in the form of thermal storage on the cold side. Depending on how well it’s integrated into the system, its level of efficiency falls between 60 and 90 per cent. So if I’ve designed it well and integrated it effectively into the system, I can achieve efficiency of 90 per cent.

If I also reduce the condensing temperature, I can save energy across the board. That’s because, in Germany, it’s on average 15 degrees warmer during the day than it is at night. Energy consumption can be reduced by two to three per cent for each degree the temperature falls. In other words, if the refrigeration systems allowed me to lower the condensing temperatures by 15 Kelvin at night, I could reduce energy consumption by around 30 per cent – provided I generate the cold at night rather than in the middle of the day. Now, if the storage unit itself offers efficiency of 90 per cent and I reduce energy consumption by 30 per cent during loading by activating the lower condensing temperature at night, then I achieve efficiency of just over 100 per cent in purely mathematical terms. In other words, if I want to save energy and there’s a demand for cold at the same time, storing cold in the form of cold storage is the most efficient way to store energy. And that’s something that’s guaranteed to work with correspondingly intelligent control, which for instance enables this reduction of the condensing temperature at night. If I don’t do that, I don’t gain anything. If I say that I condense at 40 degrees during the day or at 40 degrees at night, then I have the same energy consumption in both cases. But if I condense at 25 rather than 40 degrees at night and can thus save energy, it all makes sense.

What else does intelligent control like this need to be able to do?

Ideally it would take future weather into account. If I want to use energy storage in order to promote the use of renewable energies, then it makes sense for all my storage units to know that tomorrow it will rain and there won’t be any wind. That means I won’t get anything from the wind generators and very little from the photovoltaic system. But if I’m expecting a windy, sunny day tomorrow instead, then I can basically empty my storage entirely because I know that on the next day I can recharge them. To a degree, this idea comes from biology, bionics. Using storage like that is exactly what nature does. Many animals eat a lot during the summer to build up fat reserves, which is then used in the winter.

Another issue is clearly noise. The energy transition, electric cars and electric mobility are one side of the coin. But you also need to think outside the box and pursue new approaches even when it comes to simple heating. I can, of course, insulate the entire building so well with our air-conditioning and install a good ventilation system with heat recovery that I hardly need to heat. But that’s not really a solution in existing buildings, as many of them are not built according to the passive house standard, so I have to do it differently. Now I can do that with oil or gas heating or I can opt for a heat pump. And when you see the noise emissions that the heat pumps have: for most heat pumps that use air as a heat source, the compressor and fan are located outside. If a system like that has a sound level of 45 or 50 dB at night and the next-door neighbour wants to sleep with their window open, that can be a problem. So, there’s definitely demand there. Compressors need to be made quieter, just like fans, but also more efficient at the same time. While there’s not much more potential for increasing efficiency with the compressor itself, there is with the refrigeration system as a whole, which can be achieved by controlling the refrigeration system.

Born in Darmstadt in 1962, Professor Kauffeld has been Speaker of the Institute of Refrigeration, Air-Conditioning, and Environmental Technology at Karlsruhe University of Applied Sciences since 2006 as well as Vice Dean of the Faculty of Mechanical Engineering and Mechatronics since 2009. He also has many qualifications in business, research and teaching thanks to his activities as development engineer and project manager for countless international projects.

How do you think companies in the industry could react to the shortage of skilled workers? How can we generate excitement for refrigeration among young people?

You’d have to dial down this highly pronounced safety awareness to a degree. When I think about the experiments we used to do at school and the ones my children do now, they have to wear safety goggles, protective coats and rubber gloves for an experiment with lemon and washing-up liquid. Experimenting on your own doesn’t exist at all any more. That’s something you’d have to start doing in primary school. There are so many safe and interesting things kids could be doing. We also notice here at the university that we receive fewer and fewer applications for technical fields. Of course, this is also an image problem to a degree, as the best refrigeration or air-conditioning system is the one you can’t see or hear. It begins with the refrigerator: the evaporator is now well hidden, whereas in the past it was installed where everyone could see it. The compressor is attached at the back and, in rare cases, the refrigerator is pulled out from the wall for a look at the technology. How should people identify with that?

… Answering that question remains a challenge for the entire industry. Thank you for the conversation, Professor Kauffeld!