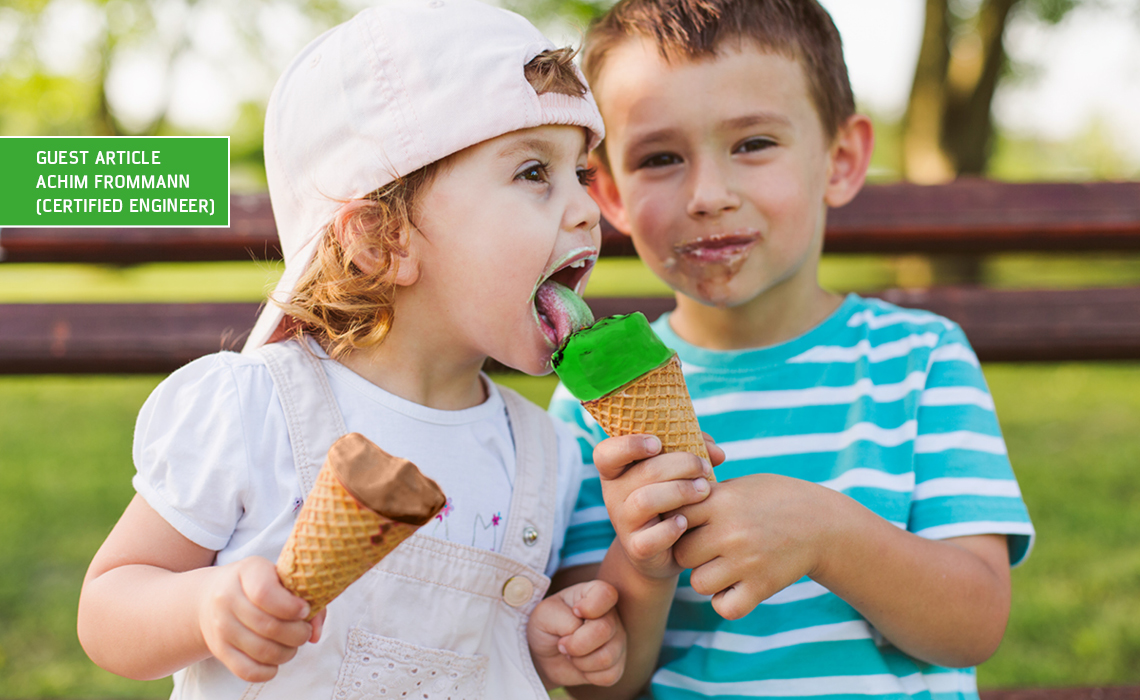 In the end there’s the beginning

The refrigeration of foods was, and still is today, an innovation regarding the use of natural refrigerants. Ice and snow were used to store food in the mountain regions of central Europe. This method continued up to the 20th century

Trading in natural ice began as early as in the 18th century, first in North America and then later also in Europe. This formed the basis of a major industry for almost 100 years. Transportation of the ‘white gold’ was carried out via trade routes all over the world and signified huge progress. The mining and the diverse applications for this first natural refrigerant brought work, a supply of fresh food throughout the year and continuous production processes in breweries or meat processing.

Initially, industrialisation in the 19th century led to the mechanical generation of ice and later its generation using cooling energy with refrigerants such as ethyl ether, ammonia, CO2, or SO2. These processes were independent of location, which ultimately brought the ice trade to an end. However, there were then some fatal accidents caused by leaky refrigerators and air conditioning systems, which led the US company General Motors to develop the first CFC refrigerant in 1928. They were seen as safe for a long time; however, around 50 years later, their potential to destroy the ozone and their contribution to the greenhouse effect became apparent.

Today, the fourth generation of synthetically generated refrigerants already exists in the form of HFOs. None have been able to deliver an ideal result to date. Added to this is the fact that the synthetic and natural substances are becoming more and more similar. Commercial refrigeration has gone back to its roots and today new systems operate only with the natural refrigerants CO2 and hydrocarbons.

Without freshness there’s nothing

For our society and the global goods trade, commercial refrigeration is essential. It is the only method of conservation that maintains the freshness of products from generation to the point of sale. The focus of the retail trade today is on sustainable and efficient refrigeration methods, for the protection of the Earth’s climate and for system operation that boasts low consumption, low costs and sustainability.

Trading groups realised many years ago that the potential CO2 savings expected by politics, could be achieved primarily through refrigerants. For this reason, in Germany and in many other European countries, compound refrigeration systems on the basis of natural refrigerants have become the norm for medium-sized and large stores. In particular, supermarket and self-service department store operators rely on transcritical CO2 booster systems for low temperature application and medium temperature application. Ejector technology is increasingly being used to further increase energy efficiency. This enables systems in higher ambient temperatures to work more efficiently. An alternative to this is offered by BITZER with the new EXPANDER, which is not only suitable for new systems, but also for retrofitting. At an ambient temperature of 32°C, it can be used to increase the cooling capacity of a standard booster system at the design point by more than 20 per cent.

In addition to the large compound system, a number of manufacturers now also offer small condensing units for CO2. Thus, cooling capacity ranges from 1 to 10 kW for low temperature application and from 2 to 16 kW for medium temperature application are covered by only one air cooled gas cooler. Installation should be very simple, in a similar way to a split air conditioning system. Target groups are small food businesses, cash and carry stores, petrol station shops, butchers as well as gastronomy and hotel businesses with few cooling positions and cold stores.

Hydrocarbons are in use today as a second long-term solution. In 1993 the first isobutane refrigerators to be manufactured in series came onto the market. These were soon followed by chest-type units that were ready to connect, drink chillers or plug units and piggyback units with propane. Supermarkets and discount supermarkets are now using these flammable refrigerants in decentralised refrigeration systems and new refrigerated display cabinets for medium temperature application and in cold stores. The primary refrigerant circuits for these are either at a central point in a machinery room or in the store and in the refrigerated display cabinets. The removal of heat energy is carried out using heat exchangers via the secondary circuit – also known as a ‘water loop’ – to the environment.

The industry has taken on a leading role in climate protection. For years now, European-wide operating traders have been investing in energy-saving stores and branch renovations. In addition to new, consumer-friendly shop concepts, it is all about the reduction of energy consumption for lighting, heating, air conditioning and refrigeration. Thus, in food retailer chains, the share of energy costs in net sales lies at 1.4 per cent. In terms of electricity consumption, the largest share of this by far is refrigeration at 47 per cent.

A contribution to this is made by the described conversion to modern refrigeration systems with natural refrigerants. According to a recent survey conducted by the EHI Retail Institute in Cologne, 41 per cent of food retailers have each invested more than €25 million in energy efficiency measures in the last five years. The renovation rate in trade has been at an amazing ten per cent for many years – a sharp contrast to the residential building stock at only one per cent. All in all, at 50 per cent, commercial refrigeration has significantly contributed to saving its CO2 emissions since 1990, and has thus already exceeded the climate protection goals once set by the Federal Government to be achieved by 2030. According to information from the German Retail Association (Handelsverband Deutschland e. V., HDE), over €500 million has been invested for this purpose.

Energy management has also been a part of investment planning and the sustainability strategy in commercial refrigeration for many years. This is because, according to the European CSR guidelines (2014/95/EU) which have been carried over into national legislation since March 2017, large companies have to account for their social and ecological actions. This concerns all capital market-orientated companies who employ more than 500 workers and whose balance sheet total is either more than €20 million or whose revenues exceed €40 million. According to EHI, 60 per cent of the surveyed companies in food retail publish a sustainability report which, of course, includes measures on the reduction of CO2 levels.

Commercial refrigeration is therefore moving forward in many European countries. At the same time, it is noticeable that plans are being made for the long term. In mid 2013, Metro AG resolved to withdraw from the use of F-gases. New and converted systems have since been equipped with natural refrigerants wherever technically possible. In the meantime, over 170 stores all over Europe operate with CO2 for medium- and low-temperature applications. The latest example of this is Metro Cash & Carry Österreich GmbH. Its pilot project in the Austrian city St Pölten includes the construction of a zero-emission wholesale store in which largely sustainable materials were used. The wholesale store runs without external heat input and air conditioning with concrete core activation and a natural ventilation concept. In winter, the heating runs on the waste heat from the transcritical CO2 refrigeration system and ejector. All implemented measures ensure that energy requirements are at a minimum of 115 kWh/m2 retail space.

The REWE Group has stated that it already started a programme in 2008 to halve overall CO2 emissions per m2 retail space compared to 2006 by 2022. According to its most recent sustainability report from 2017, almost 40.3 per cent has already been achieved. In November 2009 the trading company opened its first CO2 -neutral store in the country in Berlin. The refrigeration systems use CO2 as a refrigerant for medium- and low-temperature applications and propane for ready-to-use chest units. The warmth required for the heating system is removed from the CO2 cooling process.

Migros from eastern Switzerland went one step further in 2017 with its first ‘plus energy’ store in the Swiss town of Zuzwil. The aim of this project was to establish a branch which was able to cover its own energy requirements. This was achieved with a set of measures including the utilisation of waste heat from the refrigeration system and with refrigerated display cabinets which, for an ideal ambient temperature of goods of +2°C to +4°C, raise the evaporation temperature to a constant 0°C without defrosting. The store is part of Migros’ internal 2020 climate and energy strategy, which plans to reduce greenhouse gas emissions by 20 per cent, while reducing electricity consumption by ten per cent by 2020. The Edeka Group, as a cooperative trading group, also relies on CO2 as a refrigerant in many stores. Edeka Regionalgesellschaft Minden-Hannover was recently awarded for its combined use of a modulating CO2 ejector with a refrigerant pump. The project was implemented in a cash and carry store in Soltau during active operation, whereby energy consumption there was further reduced and energy efficiency was increased.

In addition to large supermarket operators, discounter supermarkets also work with natural refrigerants. Aldi Süd has had compound systems with the CO2 refrigerant or propane for chests since 2006. Aldi Nord is testing propane in compound systems with a ‘water loop’ system, and market competitor Lidl started using propane in an integral system in 2009. The cooling units are located either directly in the prefabricated refrigerated display cabinets or they are executed as separate evaporator units which are implemented in cold cells or cold stores.

Back to the future

Commercial refrigeration has therefore found its way back to its natural origins. A development which is sure to be sustainable for the future and which cannot be better described than with this concluding quotation:

‘An ideal refrigerant which fulfils all mentioned requirements has not yet been found and will probably not be able to be found in the future. Therefore, one will probably have to make do, from case to case, with seeing the most important requirements as being fulfilled and, as far as possible, making the best of those which cannot be fulfilled.’

This originates from one of the most extensive and most significant series of publications with the title ‘Handbuch der Kältetechnik’ (Manual of Refrigeration) by a pioneer in refrigeration: Dr Rudolf Plank (certified engineer) – written over 60 years ago!