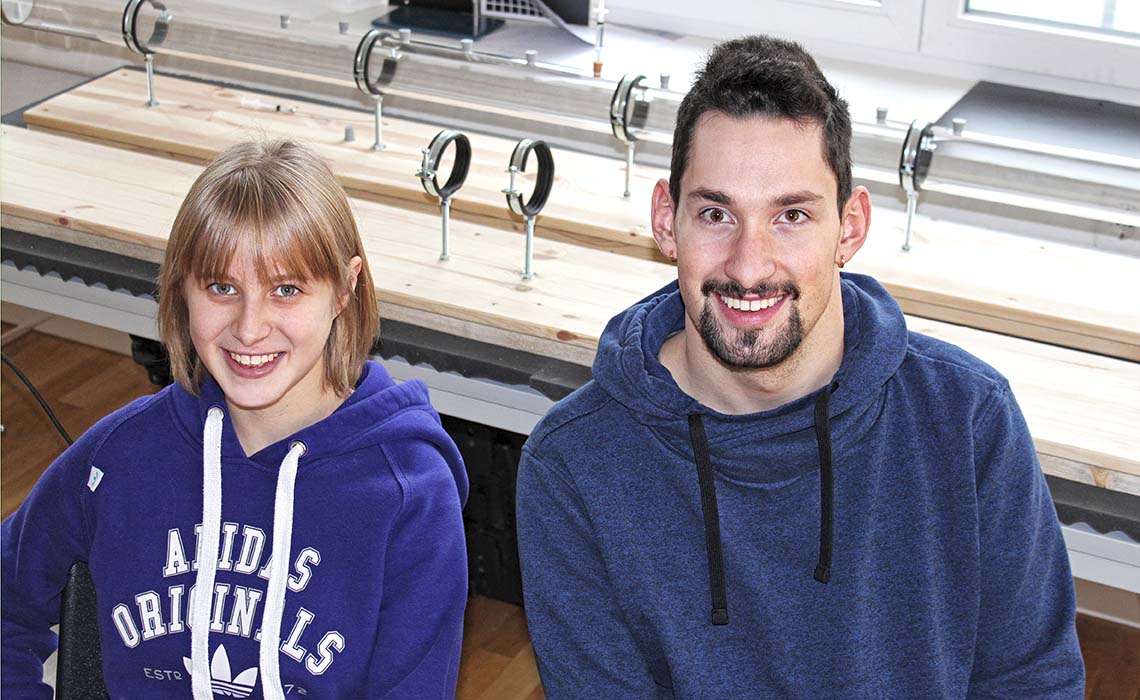 ‘The influence of sound on oil separation in refrigeration compressors’ was the title of the ‘Jugend forscht’ assignment of Julija Frank and John Jacob, aged 18 and 20 respectively. Both are school children of Gewerbliche und Hauswirtschaftliche Schule Horb at the river Neckar and spend their leisure time at the BITZER-sponsored Jugendforschungszentrum Schwarzwald-Schönbuch e.V., a youth research centre and training workshop for young people interested in science. That’s how Julija and John came up with the idea to work with refrigeration compressors. ‘BITZER invited us for a company tour via the youth research centre,’ explains Julija. ‘During the tour, we were introduced to Dr Frank Vetter, Head of the BITZER Research Laboratory, who told us about a special problem that occurs when using refrigeration compressors and would be the perfect small science project.’

From problem to research project

The motors inside refrigeration compressors are lubricated with oil to ensure they run well. But because no oil should end up in the refrigerating circuit if at all possible – as it hinders heat transfer – up until now, it has always been separated out via a wire mesh system, a solution that has not yet been fully researched or perfected. That’s because the drops adhere to the wire mesh with varying degrees of success depending on how much oil there is. ‘We were instantly interested,’ adds John. ‘And we would have liked to begin with the research project straight away.’

‘We were able to make drops of water vibrate in the Kundt’s tube. Next we’ll try it again with a drop of oil.’

Many hours of tinkering

Over the next several weeks, they gradually got better acquainted with the problem at the youth research centre with the specialist support of their project supervisor. ‘In order to understand the precise mechanism and get to the bottom of the phenomenon, Dr Vetter advised us to work on determining if acoustics influence oil separation in refrigeration compressors. Of course, we couldn’t carry out our tests directly on a compressor, which is why we built a Kundt’s tube for simulation at the youth research centre,’ says Julija. A Kundt’s tube is a prepared glass tube which makes standing waves visible.

The two of them kicked off the experiments with water instead of oil. ‘We were able to make drops of water vibrate in the Kundt’s tube. Next we’ll try it again with a drop of oil,’ says John, explaining the current state of the tests. After recording their water-based tests with a high-speed camera, they evaluated the results and wrote them down in a report, which the budding scientists then submitted to the ‘Jugend forscht’ regional competition, earning them second place in the physics category. ‘It’s just another incentive for us to keep on working,’ says Julija.

‘We’re delighted when school children such as Julija and John get excited about science,’ explains Dr Vetter. ‘We want to promote this interest and provide the next generation of researchers with the opportunity to give free rein to their love of experimentation.’ That’s why BITZER and THE SCHAUFLER FOUNDATION are so active in the region, including as a sponsor of the Jugendforschungszentrum Schwarzwald-Schönbuch young research centre in Nagold. ‘This allows us to secure our next generation of engineers and scientists over the long term.’