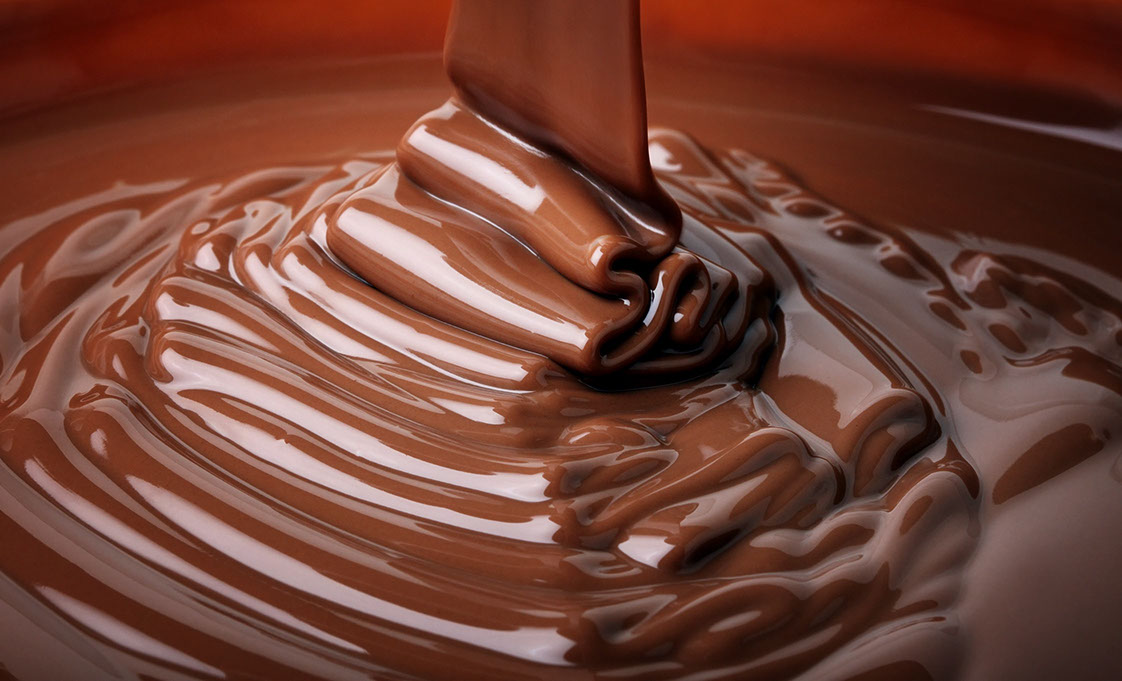 When it comes to producing chocolate, maintaining precisely defined production conditions along with strict hygiene requirements is extremely important. Chocolate manufacturing is a highly technical process in which refrigeration plays an important role – and the Lindt & Sprüngli facility in Aachen is no exception. Four R134a systems and three ammonia-based systems (NH₃) fitted with BITZER screw compressors maintain optimal conditions there.

Refrigeration and air-conditioning specialist HSV Kälte-Klima-Lüftungstechnik based in Baesweiler near Aachen has 55 employees and offers the full range of building technology – from conventional refrigeration, ventilation and air-conditioning technologies to the ultimate application: clean room technology. Nearly all of its customers are industrial companies, which Managing Director Heinz-Josef Lentzen and his team make every effort to impress with expertise and superior quality: ‘Our standard is perfection. With the expertise, decades of experience and commitment of skilled employees, we are able to meet the highest quality standards.’ The HSV company has been overseeing the Lindt factory in Aachen for many years and, thanks to its full maintenance contract for all refrigeration, air-conditioning and ventilation systems, knows the factory grounds inside and out. Most of these systems were planned and installed by the refrigeration specialist in Baesweiler. The number of systems maintained was expanded significantly in 2013 and 2014. The newly constructed production hall also contains a new refrigeration plant, in which refrigeration systems with a total capacity of nearly 5 MW have been installed. Refrigeration is required for cooling production machines and for air-conditioning in production rooms and warehouse spaces. Just like changes in humidity and air temperature in the hall, fluctuations in the temperature and volume of cold water required by production machines have to be avoided at all costs.

When HSV began planning the new factory hall in 2013, a room was specified for the refrigeration plant, housing an R134a chiller with a capacity of 600 kW for cooling water (8°C/14°C) for the purpose of air-conditioning the hall, as well as an NH₃ system for brine cooling (–3°C/+2°C) with 500 kW for the purpose of machine cooling. The expansion of the hall caused its cooling requirements to increase to 3,400 kW for water cooling and 1,800 kW for brine cooling. It was discovered early in the planning process that a slightly higher cooling capacity would be necessary, which is why HSV developed a modular refrigeration concept that would allow the system to grow with the factory. The amount of space allocated to the refrigeration plant could not be expanded. A solution had to be found that would make it possible to hold four R134a refrigeration systems, each with 850 kW; three NH₃ refrigeration systems, each with 600 kW; and the corresponding equipment such as pumps, storage tanks and hydraulic separators all in the same amount of space made available in the first round of planning.

While the R134a machines didn’t pose any problems in terms of space, the NH₃ systems did because of the large dimensions of the separators and evaporators. The toxicity of the ammonia posed significant challenges in terms of the operating reliability of the machines. Due to these unique challenges, this report will focus on the refrigeration technology of ammonia systems later on.

As a long-standing partner, HSV commissioned compact Kältetechnik – a company based in Dresden that specialises in high-quality system construction – to build the seven chillers. The schedule was highly ambitious. Originally scheduled to take three years, the removal was eventually reduced to one year. Construction on the building technology began in February 2013 and the order for the chillers was placed with compact in May. Most of the chillers were completed in October 2013, so that Lindt could begin setting up the production lines.

The four air-cooled liquid chillers with the R134a refrigerant comprise two semi-hermetic screw compressors (BITZER CSH9573-180Y), two refrigerant receivers each with a 228 l capacity, a two-cycle evaporator with a shell and tube construction and a switchboard for power supply and controlling the chiller.

The NH₃ refrigeration system comprises three separate capacity-regulated, air-cooled, single-stage ammonia refrigeration systems (each with a 600 kW cooling capacity), each with two open-drive screw compressors (BITZER OSKA 8571-K). The ammonia systems operate in compound connection and have an evaporation temperature of –6°C and a condensation temperature of +42°C. Each screw compressor unit is installed on a steel base frame. The two screw compressors suction the evaporated ammonia gas out of the evaporators and feed it into the condensing units. The compressed ammonia gases are condensed in the air-cooled condensers located on the roof. The screw compressors are connected to a double-stage oil separator and an oil cooler, and each have a theoretical displacement of 410 m³/h. An oil cooler with a 90 kW capacity is installed on the screw compressor unit to cool the refrigeration compressor oil. This oil cooler is cooled using brine, which is fed from the glycol circuit into the oil cooler via a pump. Water with 30 per cent propylene glycol (inlet +2°C) serves as coolant. The compressors are regulated according to the evaporation temperature. The compressors and capacity steps are electronically switched on and off via an integrated electronic compressor rack controller. The condensing pressure is also regulated electronically. When the condensation pressure increases, the EC motors of the condenser fan are seamlessly adjusted up or down. If the maximum allowable pressure is achieved, the compressor capacity is automatically reduced to prevent an emergency shut-off. If this step is unsuccessful, emergency shut-off is initiated via the safety pressure cut-out. 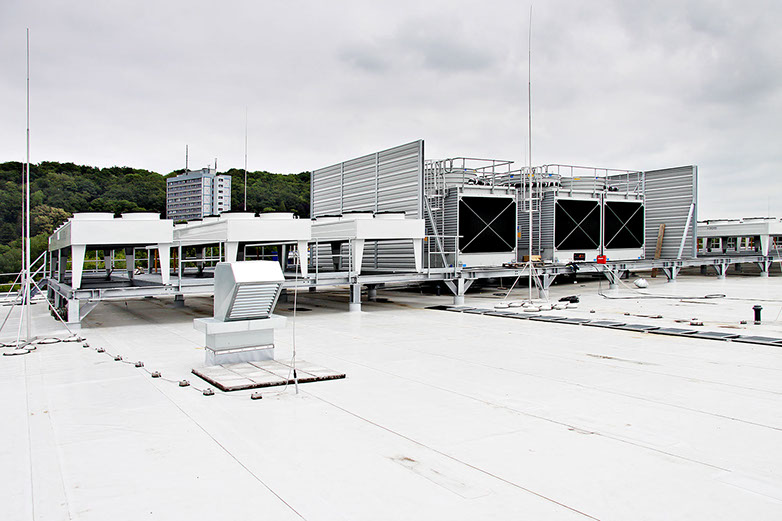 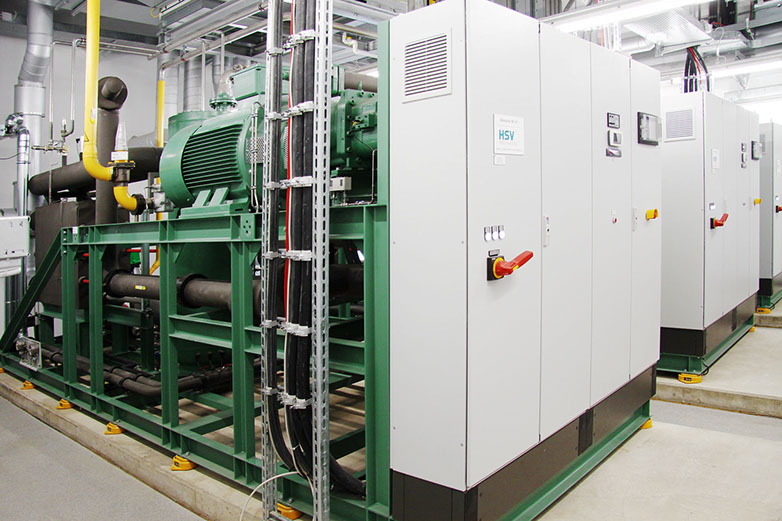 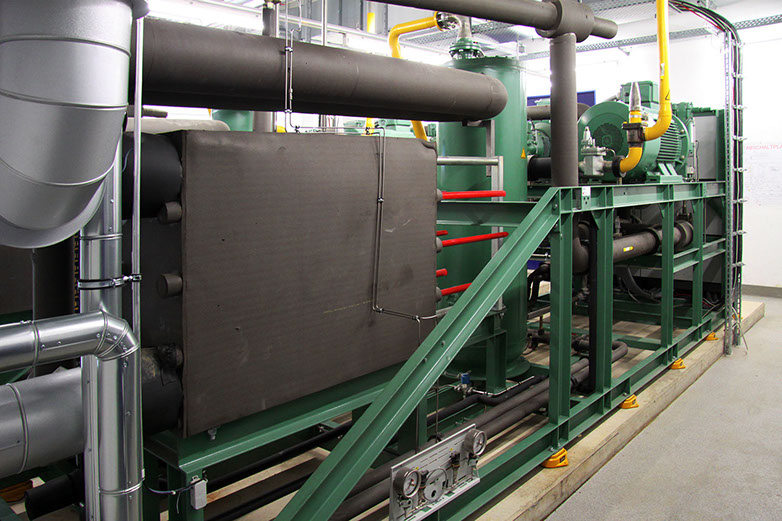 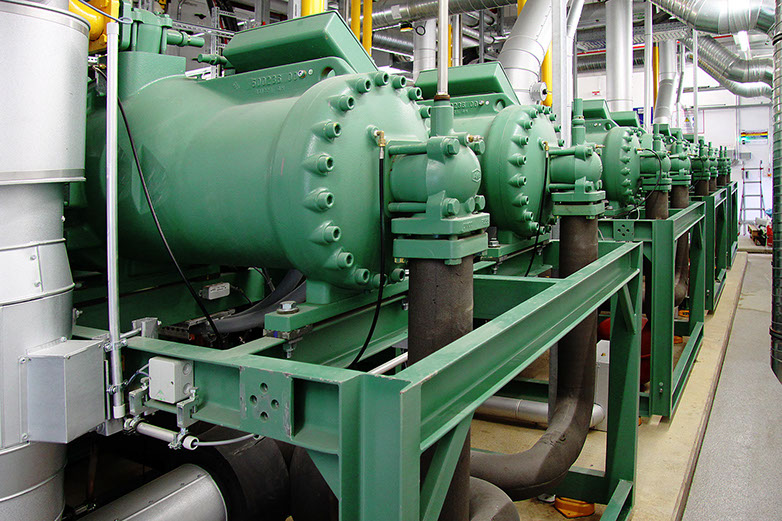 Each machine unit is equipped with comprehensive safety technology to prevent refrigerant or oil from leaking out. Each refrigerant circuit features sensors for measuring pressure, with high or low pressures reported to the central control system, which has all the maximum allowable pressures in normal operating conditions stored. If unacceptable levels of pressure are achieved, the system is monitored and shut off and the operator is informed via an error message. If this system fails, mechanical pressure limiters also shut off the system. There are separate low pressure and high pressure limiters. Should this equipment also fail, an integrated high pressure cut-out offers a third phase of monitoring. This can only be reset using a tool, which means that, if the third safety phase is initiated, only an authorised person can switch the system back on.

As a supplier, compact is responsible for ensuring that the delivered chillers live up to the most demanding safety standards in terms of material and workmanship. And because compact is a recognised specialist welding company and has the necessary authorisation, the R717 brine chillers come with the CE label. The R134a systems were constructed with the same high standards as the NH₃ systems. Heinz-Josef Lentzen is confident that both the NH₃ and the R134a systems are absolutely tight.

In addition to the technical system options described, HSV also developed a comprehensive risk assessment system for the engine room in which the NH₃ systems are housed.

Despite multiple last-minute changes in the plans, it was possible to complete the new Lindt & Sprüngli factory on time thanks to the early and close collaboration of all those involved. Comprising four R134a and three NH₃ chillers, the 5 MW system was built to be so compact, thanks to the intensive pre-planning and optimisation work of HSV and compact Kältetechnik, that it fit inside a technology room that would otherwise be much too small. All the refrigeration and ventilation technology meets the operator’s requirements in terms of maximum energy efficiency, operating reliability and system safety. Thanks to cutting-edge refrigeration, Lindt can continue to impress customers with its products, which in nearly 170 years of company history have managed to make a name for themselves: delectable, melt-in-the-mouth premium chocolates.