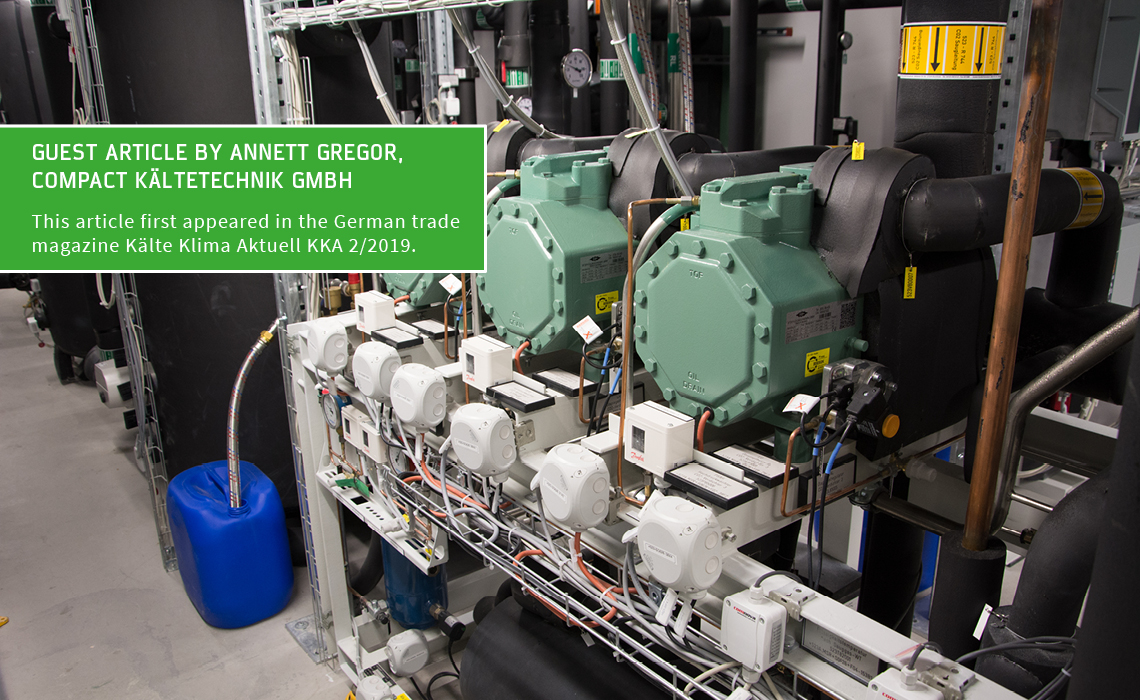 Based in Dreieich in the German state of Hesse, the pharmaceutical manufacturer Biotest required new refrigeration systems in order to expand its production. The customer wanted natural refrigerants to be used. In total, 100 kW had to be supplied for low temperature storage and 30 kW for maintaining temperatures, air curtains and pre-cooling. As pharmaceuticals are a sensitive field of application, every machine at the site has to have a redundant back-up

Biotest is a global provider of plasma protein products and biotherapeutic medicines. Its products are primarily used in clinical immunology, haematology and intensive care medicine. The production site is situated in Dreieich, Germany, at the headquarters of the company. Working with contractual partners, Biotest processes up to 1.3 million litres of blood plasma per year.

Biotest has thereby started to double the capacity of the Dreieich site through the investment project ‘Biotest Next Level’. The new production building was built to the latest standards of the German Energy Saving Ordinance (EnEV 2015) and Renewable Energy Sources Act (EEG) and is supplied by an independent power supply centre. Biotest wanted to install an environmentally friendly system by any means – a ‘green building’ in the sense of the Ecodesign Directive.

Generally speaking, IE4 efficiency class BNL motors should be used in the construction project as well as motors with frequency inverters in order to avoid current peaks during later operation and bring the system to the correct operating conditions. Where possible, natural refrigerants should be used. This guarantees that the
refrigeration systems will be able to operate on a long-term basis free from the restrictions of the F-gas Regulation.

In an earlier stage of planning, KKR Kälte-Klima-Reinraumtechfnik GmbH rom Langen sat down with the system supplier compact Kältetechnik GmbH from Dresden to discuss various potential operation modes. The initial plan ideas and concepts of compact Kältetechnik leaned towards the favoured standard, an R134a and CO2 cascade, as had been used in past projects with similar requirements. After the companies pressed ahead with exploratory discussions and all peripheral data had been made available, a schedule of services mapping the requirements of the end customer was generated.

Working on the basis of the schedule of services in further conceptualisation stages, compact Kältetechnik drew up alternative approaches such as an NH3 application, CO2 as a booster or CO2 as a cascade solution in combination with a hydrocarbon as the refrigerant. In the past, compact Kältetechnik has not favoured propane or propene in indoor installations for safety reasons (i.e. flammability). However, in this specific scenario with Biotest, the extensive risk analysis conducted in advance indicated that it was realistically feasible to use propane in the system.

A system solution where the refrigerating capacity was split across four machines per section with redundant back-ups was ultimately decided on – this was equivalent to doubling the original individual machines. For safety reasons, a water cooled machine was selected as a heat exchanger. This made it possible to reduce the charged amounts in the systems and avoid pipes carrying refrigerants through the envelope of the building.

In order to prevent explosive mixtures of gas from forming in the machinery room, the planning team decided to fit every individual machine with a ventilation system. For improved safety, a gas detector which would shut the machines down if any refrigerant leaked was also planned and installed in the exhaust duct.

Once the scope of services had been defined successfully, the overall concept was considered and examined. The natural refrigerant CO2 was chosen for the air coolers. As a wide range of cooling was also required for air curtains and pre-cooling rooms throughout the building, a cascade solution with a brine intermediate circuit was the optimal technical outcome.

Four CO2 compound systems achieve a room temperature of –35°C in the storage rooms through direct expansion. Cooling in these cascade stages is by brine at –8°C. Greenway Neo -25 was used as a heat-transfer fluid throughout the project. Eight liquid chillers which work with the refrigerant propane were added to generate brine. The eight machines and the resulting eight individual circuits allow for small refrigerant charges per circuit. As the propane machines are in the building, the liquid chillers with housing are connected to an exhaust system which is in permanent operation and monitored by a gas detection system.
When all propane-charged liquid chillers are in operation, 308 kW of brine is available at –2/–8°C to safely cool the CO2 compound systems as well as other evaporators at this temperature level. Two other propane-charged liquid chillers supply temperature-controlled rooms with brine at a temperature level of –9/–15°C. Likewise, these machines have redundant back-ups.

All waste heat from the propane-charged liquid chillers is used to generate hot brine to defrost the freezer evaporator and the excess waste heat is siphoned off through on-site heat exchangers to a hot brine circuit by a water-glycol buffer. Additionally, various heat exchanger stations were added to increase the efficiency of heat transfer throughout the building. Once again, compact and KKR worked together to design and plan the pump stations in order to achieve the necessary media flow rates and adapt them to current performance data over the course of the project. Connecting the machines within the building complex resulted in 34 pump stations to distribute the coolant.

Certain particularities had to be taken into account when the systems were installed on-site. The compound systems were transported to the sixth floor through a 30-metre-high roof opening by a 160-tonne crane. Weighing approx. 460 kg per unit, the evaporators in the low temperature storage were hung on a ten-metre high steel frame using a forklift with a telescopic mast. Approx. 2,800 metres of CO2 and cold brine piping had to be laid in intermediate spaces and shafts in difficult installation conditions. The refrigeration and brine systems, pumps and storage tanks in the machinery room were installed in a very small space.

Comnova was in charge of the control systems. The systems which had to be controlled are low temperature refrigeration rooms and medium temperature cold cells. The compound system is in the same room as the control unit. All fault repairs must be acknowledged. The fault message outputs for system failures and the personal alarm are connected to Biotest’s fault indicator.

The rooms are controlled by means of the room temperature. The refrigeration systems also have a time-sensitive fault response switchover which can be parameterised using the display. Additionally, the machines can be activated depending on the power demand and can be speed controlled depending on demand with frequency inverters. The system is operated and monitored using a touch panel which also displays alarms.

The system has emergency off switches inside and outside of the mechanical equipment room. When pressed, these shut off the system immediately and completely. Once the buttons have been reset and confirmation provided at the switch cabinet, the system is released to resume control. The personal alarm can only be activated in the plasma storage room and has to be reset there in addition to confirmation at the switch cabinet. Each activation generates an alarm which also notifies the reception area.

The cold brine is generated by two propane/brine systems. The systems are selected by the step/priority switch and the time-sensitive/fault response switchover. A storage tank with 521B200 brine (Greenway) was added to supply the brine air cooler for medium temperature ranges and the CO2 cascade system. The brine is kept at temperature by the propane compressors and a superheating control system.

The entire system was commissioned successfully and is running steadily in line with the required and described parameters. The propane systems are operating flawlessly. Following their commissioning, the CO2 systems are also running perfectly and the expected nominal temperatures of –35°C have been achieved and are being maintained as planned.

This project was awarded first place in the Commercial Refrigeration category at the Chillventa Award 2018.