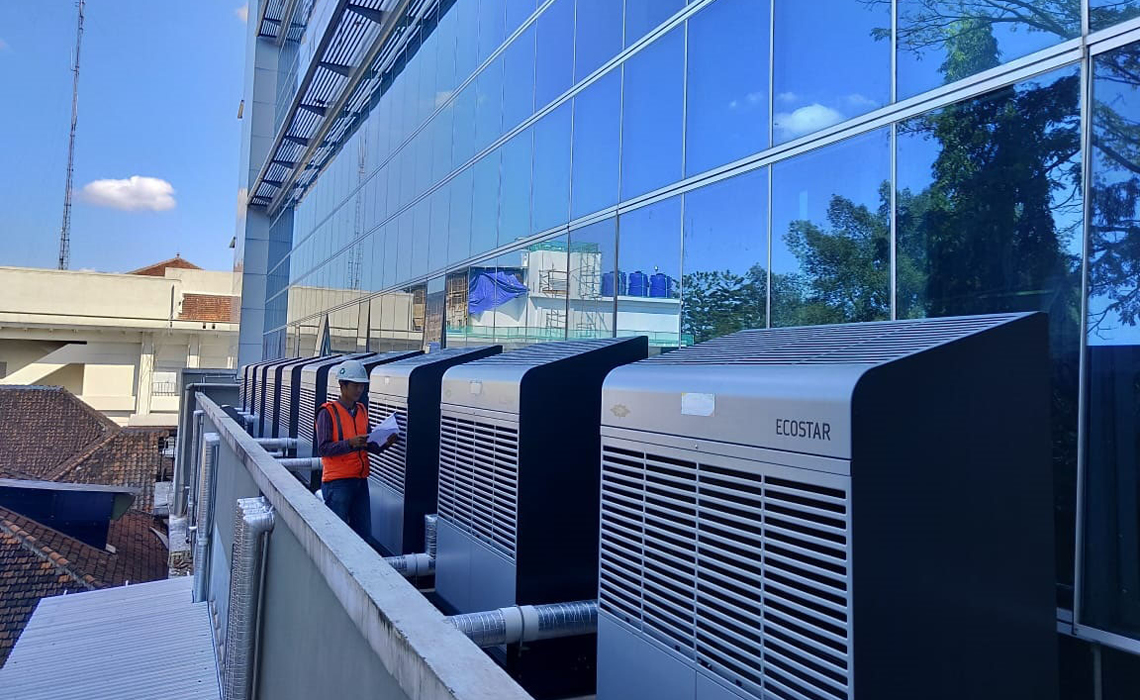 In order to ensure improved treatment for its population, Indonesia is investing heavily in the development of its healthcare system. The company PT Bio Farma relies on a total of 54 BITZER ECOSTAR

Particularly demanding products require particular care when handling them. This is certainly true of the products manufactured by the state-owned enterprise in Indonesia, PT Bio Farma headquartered in Bandung: vaccines and serums, which can be used to improve the health of the Indonesian population. The company produces vaccines against not just viral diseases such as measles, polio and Hepatitis B, but also bacterial diseases such as diphtheria, tetanus and whooping cough for the National Immunization Program in Indonesia, and also for export needs to more than 140 countries. PT Bio Farma also produces serums such as Anti Snake Venom, Anti Tetanus, and Anti Diptheria. Failsafe cooling during production and storage is a vital part of the process.

PT Bio Farma has enjoyed years of positive experiences with the BITZER ECOSTAR on this – as early as 2015, the company had six BITZER condensing units installed for their existing cold room. These were so reliable in the humid climate of Indonesia that two additional ECOSTAR units were added shortly afterwards for failsafe cooling. PT DLM Resto was responsible for both installations.

Based in Jakarta, this company has been a reliable partner of BITZER in Indonesia for many years and was also involved in the latest expansion of production at PT Bio Farma from 2018 onwards. Tedy Chriswanda, AVP – Application Engineering Manager at BITZER Indonesia, says: “Indonesia is striving for universal health care for its population. This includes the immunisation of society against infectious diseases.” As part of this development, PT Bio Farma must also increase its production annually. In order to increase production and storage capacity, the company started building a six-storey building in 2018.

Once again, long-standing partners BITZER Indonesia and PT DLM Resto took on the contract to equip the new premises with failsafe, energy-efficient refrigeration technology. Chriswanda: “As with past projects at PT Bio Farma, it’s incredibly challenging to achieve an absolutely precise temperature and energy-efficient operation at the same time. Thanks to the BITZER ECOSTAR, however, we were able to meet that requirement.” A total of 46 of the tried and tested BITZER condensing units were newly installed and have been operating reliably ever since.

Chriswanda continues: “We have 16 ECOSTAR LHV7E/4DE-7.F3Y, 22 LHV7E/4EE-6.F1Y and eight LHV5E/2DES-3.F1Y condensing units. They’re also supplemented by the eight ECOSTAR units installed in 2015.” Another challenge – as in previous years – was the installation site for the BITZER ECOSTAR units, as available space was limited. “That was certainly inconvenient,” says Tedy Chriswanda, “but thanks to the BITZER BEST software, which allows the ECOSTAR to be monitored independently through its Bluetooth connection, this proved to be no problem at all.” BITZER Asia received the BITZER Best Project Award for this project in October 2019 – a prize that honours outstanding projects and reflects BITZER values such as teamwork, trustworthiness and customer service.