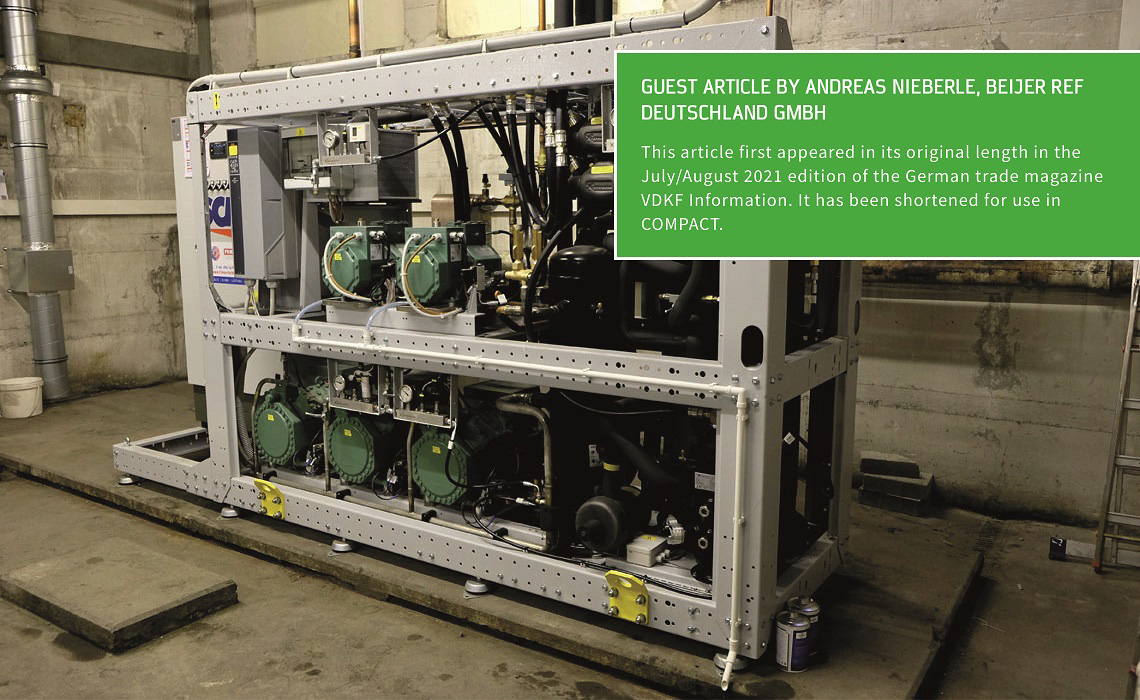 The family-run food delivery service Lunemann’s in Munich relies fully on natural refrigerants for cooling. Steady growth made it necessary to move to new premises, allowing for a new refrigeration system with the natural refrigerant CO₂. Today, the new system delivers environmentally friendly refrigeration: a photovoltaic system on the roof provides support with its own electricity, and the prepared heat exchanger will soon provide the offices with their hot water.

Established in 1983 by Jens and Anke Lunemann, the family-run company ‘Lunemann’s leckerer Lieferservice’ (‘Lunemann’s Delicious Delivery Service’) is now run by the founders and two of their sons, delivering organic produce to nurseries and businesses in and around Munich. It has also been providing a rapidly growing delivery service for private households for a number of years.

There have been several reasons for its recent growth – leaving aside the massive upheaval at the start of the first coronavirus lockdown in 2020 – which have made it necessary to add more storage space. There is stronger demand for organic produce in communal catering, and the figures for the private-household delivery service are growing rapidly. Last but not least, the pandemic has made home delivery more attractive, especially for private households, even causing some organic delivery services to stop taking on new customers and suffer supply bottlenecks.

A traditional HFC system or an environmentally friendly CO2 system?

Since March 2021, the Lunemanns have been using a CO2 refrigeration system from SCM Frigo, planned and realized by its sister company and sales partner BEIJER REF Deutschland. ‘We weighed up two different options,’ reports Benedikt Lunemann, Head of Procurement and Logistics in the company: ‘We initially considered building a completely new cold storage unit at our previous site, although moving to a new, suitable site was not out of the question either.’ While they were making plans and searching for a new location, the Lunemann brothers discovered premises that had been used to store ice cream at low temperatures for years. ‘The space was insulated for low temperature applications, and we had the option to install a photovoltaic system on the roof – thanks to an investment by the owner of the building,’ says Jonas Lunemann, Head of Sales and Marketing, before adding, ‘It ties in perfectly with our sustainable development strategy.’

A new direction for refrigeration in food retail

As part of their joint planning with the refrigeration technician, the Lunemanns delved deeper into the topic of refrigeration for the first time and asked the Munich-based company Friess to outline their options. ‘We had never gotten involved with our refrigeration infrastructure, which always ran smoothly in the background. Usually, something only gets our attention if it stops working or if, as in this case, changes have to be made,’ says Jonas Lunemann.

In fact, small food and organic produce shops in particular often never have anything to do with sustainable cooling, explains Dr Matthias Schmitt, Director of the Federal Guild Association of the German Refrigeration Trade (BIV). ‘Smaller shops more often move into existing stores, taking over the entire infrastructure without giving the slightest thought to sustainable, environmentally friendly and energy-efficient cooling,’ says Schmitt. As long as the system keeps running, no notice is taken of it. Critical scrutiny would be worthwhile here.

Friess showed Lunemann’s the possibilities of a cooling system that uses CO2 as a natural refrigerant compared to a conventional HFC system. ‘The decision to use a CO2 system from SCM was ultimately a quick and simple one to make since we wanted a long-term, sustainable and risk-free cooling solution. The main reason for wanting a future-proof refrigerant was to avoid a rude awakening a couple of years down the line and suddenly no longer be permitted to operate our system.’

Nino Lindner from Friess-Technik in Munich, the leader of the Lunemann’s project, recalls: ‘I took a deep dive into the issue to familiarize myself. In most cases, there is a strong partnership between the end user, contractor, manufacturer and the wholesale trade for the planning and building phase. Small contractors without an in-house planning department receive a lot of support in the form of expertise from the wholesale trade and manufacturers, not to mention planning assistance when it comes to designing the system.’ Today, with the system running smoothly at Lunemann’s, Lindner says: ‘Given the positive experience of this system and the know-how we have acquired, CO2 will play a more significant role for us in future, as will other natural refrigerants such as propane.’

Support from the Federal Office of Economics and Export Control (BAFA)

Last but not least, however, support from BAFA (the German Federal Office of Economics and Export Control) for a CO2 solution tipped the scales for Lunemann’s. ‘The subsidy covering 15 per cent of the total investment is extremely attractive, and we were able to fill in the majority of the application in 15 minutes. Our refrigeration technician added the necessary technical details in just under two hours,’ says Benedikt Lunemann, adding: ‘Two months later, we received approval for the subsidy and were able to get started.’

A change of premises often sparks the modernization of a pre-existing cooling system in food retail. In the process, looking at current systems from an environmental standpoint is worthwhile and even necessary in order to avoid risks. Under the European F-Gas Regulation, which aims to limit greenhouse gas emissions by 2050, HFC with a high global-warming potential will gradually be banned (either for refills or use) and replaced by alternative natural refrigerants. The EU initiative RefNat4LIFE is a useful tool for refrigeration technicians and shop operators to find initial guidance. Other planning support is also available from manufacturers and wholesalers to help them make cooling future-proof in good time.

Market trends reveal growing demand for industrial refrigeration systems with higher cooling capacities and the option to use CO2 as a refrigerant. In the past, projects requiring cooling capacities of more than 5 MW had to be divided into several individual systems. To meet the trend towards larger capacities, BITZER has supplemented its CO2 reciprocating compressors with two new 8-cylinder CO2 compressors with delivery volumes of 69.4 and 99.2 m3/h. These compressors of the CKHE7 series are equipped with various intelligent functions and an advanced version of the VARISTEP mechanical capacity control. They are manufactured at the BITZER site in Schkeuditz.